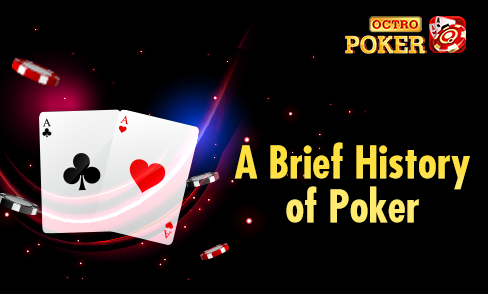 Poker has been one of the most popular card games but not many even the veterans know a lot about the how and when this great game was discovered and evolved. One of the reasons why the origin of this is not known is because its origin is indeed hard to pin down. The theories also depend on what you as a seeker consider the fundamental element of poker whether it is the gameplay, or the money because both have different beginnings.

So where did it all begin? Let’s start with gameplay. It was earlier believed that the word poker was derived from the Persian game as-nas. In as-nas there were only 20 cards deck and the five ranks from the highest to lowest were as (Ace), shah (King), bibi (Queen), serbaz (soldier) and the couli (Dancer). The complete deck was distributed among the five players. The high hands were similar to the one we have today in both online poker and offline poker, just that as-nas wouldn’t have straights and flushes, and the best hand won. It was probably then taught to French settlers in New Orleans by Persian sailors. This game was played like the modern five card stud with 25 cards with 5 different suits. However similar poker hands rankings such as three-of-a-kind were present.

However the historians recently challenged the as-nas narrative. They believed that some of the other games are the basis from where modern poker came from. According to them earlier on it was a game called Poque in France which later became Brelan, Poca in England, Brag in Britain, Primero in Spanish or Italian. Each of these games can claim that poker originated from it.

Brag, in particular, could be the game from where poker came from because of two reasons. First because it came from a country where the primary language was English. They used antes.

Here too the betting would be carried on for a particular number of rounds, but until just two players were left on the poker table. This game was played with a 32-card deck where each player was dealt three cards. Three of a kind, as you might imagine, was the best hand. So, perhaps this is their game which is believed to be poker direct lineage.

History of Poker in the United States Of America:

Poker really became popular in America after gambling scene there moved from the frontier towns to the riverboats. People were earlier tolerant towards gambling on the South-western frontier during the early 1800’s, however, they became less tolerant in the next 30 years. As the tolerance reduced, few Western towns passed ordinances against gambling and many towns ousted habitual gamblers. Then many gamblers carried on gambling by taking their trade to steamboats navigating the Mississippi River. Since it was difficult to carry heavy equipment like the roulette wheel aboard the steamboats, a reason that caused the popularity of the card game of poker to grow. As the popularity of poker grew, the 20-card deck was replaced by the 52-card deck.

During the period of the Civil War in America there were few more additions made to the poker game. These would be draw poker, stud poker (the five-card variant), and the straight. Later on the wild card was also introduced in the year 1875, lowball and split-pot poker came into existence in the 1900s and in 1925 it was the turn of community card poker games. Poker’s popularity further spread to other countries, particularly Asia because of the US military’s influence.

Invention of Texas Hold’em Poker:
As the name suggests, it comes from Texas. There is a small town  outside of Corpus Christi called Robstown where poker was first invented in 1925. The Texas state legislature has recognized Robstown as the birthplace of the Cadillac of poker. Despite these official records the exact details of the origin within Robstown aren’t clear. In the next 40 years it became even more popular and spread all over Texas.

The place is where poker legends like Amarillo Slim, Johnny Moss, and Doyle Brunson hail from. It was them and a few more players who took their Texas Hold’em skills to a bigger stage and made it talk of the town.

With internet and technology the game was played online on desktops and as it improved further the both Texas Holdem and Omaha version were ready to entertain the poker players all around the world on their smartphones. A couple of centuries ago, when there was no online poker game it was offline played by the not so lawful guys. Now it’s considered a sport which is played by poker professionals. The outlaw status has now been replaced by the celebrity status.

Hope you enjoyed reading the history of the poker game and how it evolved. In order to have the most immersive poker experience download your favourite poker app and start playing.