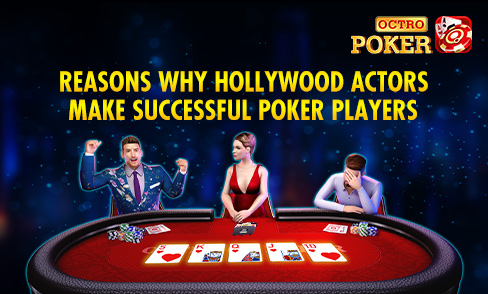 If you’ve ever played an online poker game, you know that it is a game that requires you to have nerves of steel and expressions of a monolith. Literally every player on the felt is trying to figure you out and find a kink in your armour. It is, therefore, imperative that you know how to hold back your emotions and, at the right time, fake it. So, it seems logical that someone whose job is to fake emotions would be great at this game, right? Well, yes and no. Hollywood actors are known to dabble in the world of professional poker from time to time, and some have seen tremendous success on the felt too. But, being a famous actor on a poker table comes with its own problems as well. Here are three reasons why Hollywood actors make great poker players, and three reasons they don’t.

Two Reasons Actors Have an Edge at Poker

They Can Charm their Way to a Win: Bluffing is an integral part of poker. If you can successfully bluff your opponent into folding, your poker journey is going to be a profitable one. Offline games are different from online poker game. Hollywood actress Jennifer Tilly has won an Oscar, but most people would agree that a more prestigious feather on her cap is the World Series of Poker bracelet that she got for winning the Ladies Event in the year 2005. She has faced and proved her mettle against players like Daniel Negreanu, Doyle Brunson, and Patrik Antonius. Her skills as a world class actress helped her keep her expressions in check and her timing helped her to bluff the right amount at the right time. She is a prime example of proving that acting skills have more use than just at a screen or a stage.

In The End, It’s All About Entertainment!: Whether you play Texas holdem poker online on a poker app or play offline, you do it to be entertained. Actors and Sportsmen live some of the most luxurious lives in the world. Have you ever looked at a celeb and thought,” Why on God’s green earth do they get to live such an awesome life when clearly they are dumber than a bag of potato chips?”. Well, the answer is simple. We humans love distractions and entertainment. If you can make us forget life’s harshness and entertain us, we are ready to give you a life suited for royalty. This is why actors have a great time on the poker table, too. The environment on a poker table is usually tense. Every player wants to maintain their poker face. If you can lighten up the mood of other players, you can bet they will definitely call you in their next game! Being able to play the game well and also keep other players engaged in unrelated topics is a fine line that only a few players have truly mastered. Famous comedian and actor Kevin Hart is a prime example of such a player.

Greed: If you ask Marvel movies enthusiasts who their favourite Spiderman is, most will take the name of Tobey Maguire. But before he crawled on the big screen as your friendly neighbourhood Spiderman, he was one of the most skilled poker players ever. Some say Tobey has made millions on the poker table. But while his skills were commendable, he got a reputation of taking advantage of other players, and to bring in whales for a hunt! For those of you confused, the term ‘whale’ refers to a player who spends a good amount of fortune on the poker table. This did help Tobey make a huge profit, but players soon started to avoid playing with him, as it was not a pleasant experience.

Lack of Skill: A prime example of an actor who may have had too much trust on their acting skills being a boon on the poker table is Matt Damon. While he has played the role of a genius many times on the big screen, his brilliance as a poker player was lacklustre at best. One only needs to see the highlights of the WSOP games where Matt was one of the players to see how green and uncomfortable he was. So, though having a poker face is something an actor can do really well, there also needs to be some poker skills underneath it all if they ever want to make it big as a poker player.

You may not be an actor. But you can still make it big on an online poker game. Download the Octro Poker app and show your poker skills! Octro Poker is our recommendation for Texas holdem poker online.